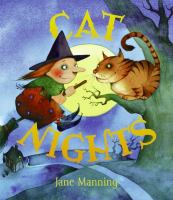 Felicity the witch begins turning herself into a cat as soon as she is old enough, and even though the rules say that she can only turn back into a witch eight times, she does it again on the ninth night.