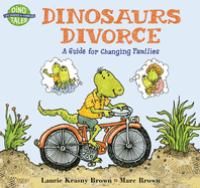 Book
Text and illustrations of dinosaur characters introduce aspects of divorce such as its causes and effects, living with a single parent, spending holidays in two separate households, and adjusting to a stepparent.