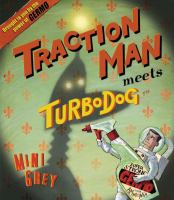 Book
Traction Man, an action figure, teams up with the high-tech but not-so-bright Turbodog to rescue Scrubbing Brush, his missing sidekick, from the terrible underworld of the bin.