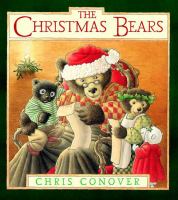 Book
Santa Bear's seven cubs watch as their father loads the sleigh with toys to deliver on Christmas Eve.