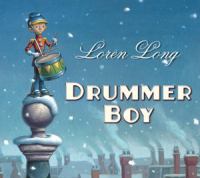 Book
After accidentally being thrown away, a beloved toy drummer boy goes on an adventure that eventually brings him back to a warm home, where he is placed near baby Jesus in a manger scene.