A pirate's night before Christmas 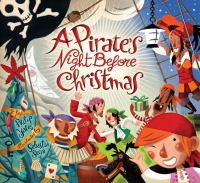 Book
On a ship of mischievous brigands--who have visions of treasure chests dancing in their heads--Sir Peggedy, with his peg leg and hook arm, pays a visit to the child-friendly pirates along with his eight giant seahorses: Salty, Scurvy, Sinbad, Mollie, Cutthroat, Cross-Eyes, Roger, and Jolly.