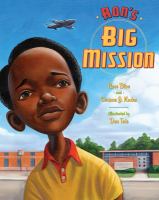 The story of how nine-year-old Ron McNair, later a real-life scientist and Challenger astronaut, desegregated his Lake City, South Carolina, public library in the 1950s through peaceful resistance.