The stupids take off 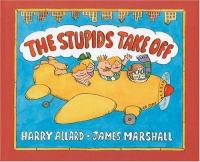 Book
In an attempt to avoid a visit from Uncle Carbuncle, the Stupids fly off in their airplane and visit several other relatives who are just as stupid as they are.