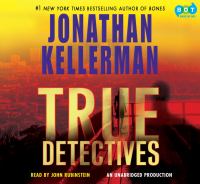 Psychologist Alex Delaware joins forces with brothers Moe Reed and Aaron Fox as they seek to uncover secrets in high places that could explain the fate of an outwardly innocent young woman.