Horse soldiers the extraordinary story of a band of U.S. soldiers who rode to victory in Afghanistan 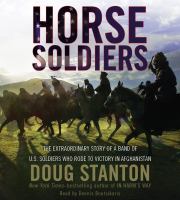