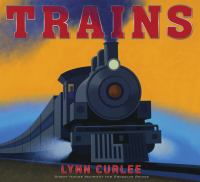 Book
There are few things more exciting than the sound of a train chugging through the country-side. First, steam engines hissed billowing clouds into the air, then gleaming diesel locomotives pulled boxcars, freight cars, and sleek passenger cars north, south, east, and west. Trains have been getting people and things to where they need to go for almost two centuries, and have long been a symbol of adventure and possibility. The story of how trains began barreling across the landscape is one of new machines, new inventions, new jobs, and new hopes. Railroad travel started with steam-powered wagons on a tramway and developed into a technology that would change the day-to-day life of Americans in the nineteenth and twentieth centuries, and forever connect one coast to another. This bold and graphic look at trains and railroads by award-winning author and illustrator Lynn Curlee traces the tracks back to where they began. All aboard!