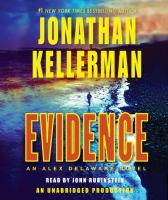 In the 24th installment of Jonathan Kellerman's Alex Delaware series, sleuthing psychologist Alex Delaware and Detective Milo Sturgis investigate a lovers' midnight romp in a construction site gone wrong. A man and a woman have been murdered, bludgeoned to death during their intimate act; and as Delaware and Sturgis dig deeper into the case, they find themselves in the midst of high society's secretive world of deception and debauchery.