Tarra & Bella : the elephant and dog who became best friends 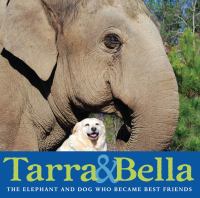 Book
A stray Labrador named Bella befriends Tarra, a former circus elephant and resident of the Elephant Sanctuary in Tennessee. While the pairing is unusual, the two are inseparable--even when a crisis threatens to separate them. Based on the national media sensation, this is a true story of friendship and loyalty.