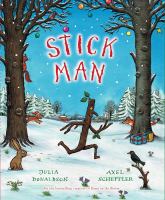 Book
Stick Man ends up far away from his family tree when he is fetched by a dog, thrown by a child, used as a snowman's arm, and even put on a fire, but finally Santa Claus steps in to make sure that Stick Man and his family have a joyous Christmas.