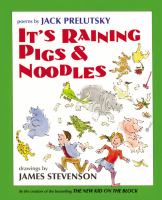 A collection of humorous poems such as "The Dancing Hippopotami," "You Can't Make Me Eat That," "My Father's Name is Sasquatch," and "Dear Wumbledeedumble."