U is for undertow 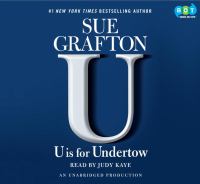 After a recent reference to a kidnapping triggers a flood of memories, unemployed college dropout Michael Sutton hires Kinsey Millhone to locate a four-year-old girl's remains and find the men who killed her.