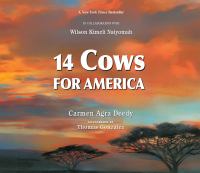 Book
Maasai tribal members, after hearing the story of the September 11th attacks from a young Massai, who was in New York on that day, decide to present the American people with fourteen sacred cows as a healing gift.