Deeper than the dead 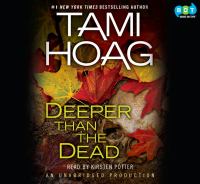 A California town is rocked to its core when two boys and a girl stumble upon a murder victim, drawing Special Agent Tony Mendez into a search for a psychopathic serial killer called "The See No Evil Killer," but as his probe continues, he realizes that the killer may be the father of one of the boys and enlists the aid of their teacher, Anne Navarre, to uncover the truth.