The honor of spies 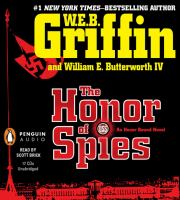 While World War II rages on in Europe, 24-year-old Cletus Frade has been hired to spring Wilhelm Frogger, a German officer, from a Mississippi prisoner-of-war camp. Having learned that Frogger has masterminded a plot to assassinate Hitler, Frade plans on bringing the war to a swift end. However, a rogue group of fascists, led by Argentinian Colonel Juan Peron, plans on thwarting the coup and snuffing out both Frade and Frogger.