Benno and the Night of Broken Glass 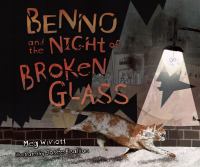 Book
In 1938 Berlin, Germany, a cat sees Rosenstrasse change from a peaceful neighborhood of Jews and Gentiles to an unfriendly place where, one November night, men in brown shirts destroy Jewish-owned businesses and arrest or kill Jewish people. Includes facts about Kristallnacht and a list of related books and web resources.