Nothing to envy ordinary lives in North Korea 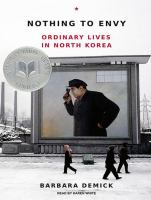 Barbara Demick's Nothing to Envy follows the lives of six North Koreans over fifteen years, a chaotic period that saw the death of Kim Il-sung and the unchallenged rise to power of his son, Kim Jong-il, and the devastation of a far-ranging famine that killed one-fifth of the population.