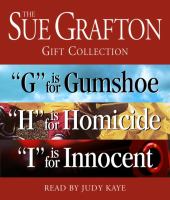 "G" is for gumshoe: Kinsey Millhone's thrity-third birthday brings about final renovations to her apartment, a new ase, and the top slot on Tyrone Patty's hit list. "H" is for homicide: To Kinsey Millhone, the death of claims adjuster Parnell Perkins looks strangely suspicious. As the evidence leads her to an insurance scammer, she must race to get to her before the scammer's spurned and violent suitor does. "I" is for innocent: After being acquitted in the shooting death of a woman, David Barney stands accused of her wrongful death in a civil suit brought on by the woman's ex-husband.