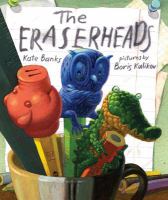 Book
Three eraserheads that live with a boy in the land of pencils, paper, rulers, numbers, letters, and drawings become trapped in one of his pictures while trying to correct mistakes.