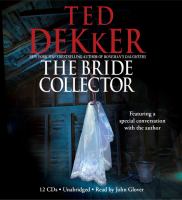 When a serial killer claims his fourth victim, FBI Special Agent Brad Raines contacts the Center for Wellness and Intelligence, a psychiatric hospital for gifted but troubled individuals. As he profiles the killer, who taunts authorities by leaving bridal veils at his crime scenes, Raines is assisted by Paradise, a young schizophrenic with the ability to experience the victims' final moments. Events start getting extremely personal to Raines when a friend becomes the killer's next target.