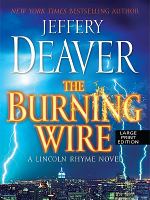 Quadriplegic forensic criminologist Lincoln Rhyme leads his team--NYPD detective Amelia Sachs, officer Ron Pulaski, and FBI agent Fred Dellray--to find and stop a killer who uses electricity as modus operandi. Meanwhile, Rhyme is consulting on another high-profile investigation in Mexico with a most coveted quarry in his crosshairs: the hired killer known as the Watchmaker, one of the few criminals to have eluded Rhyme's net.