How Chipmunk got his stripes : a tale of bragging and teasing 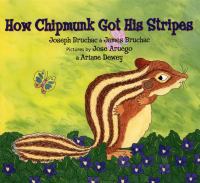 Book
When Bear and Brown Squirrel have a disagreement about whether Bear can stop the sun from rising, Brown Squirrel ends up with claw marks on his back and becomes Chipmunk, the striped one.