To root, to toot, to parachute : what is verb? 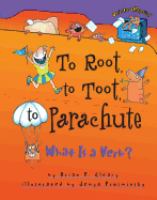 Book
Rhyming text and illustrations of comical cats present numerous examples of verbs, from "Toss and tumble," "jump and jam," to "whine and shimper," "sleep and slam."