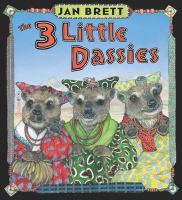 Book
In this adaptation of the traditional folktale, three little dassies (also called rock hyraxes) build their houses in the Namib Desert of Southern Africa, hoping for protection from the eagle that lives atop a nearby mountain.