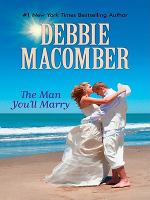 "The First Man You Meet... Shelly Hansen was horrified when her great-aunt's wedding dress arrived--because, according to family legend, she was destined to marry the next man she met. So when she tripped on an escalator and fell into Mark Brady's arms, she told him--and herself--that she wasn't interested in marriage. But then she started seeing him everywhere.... Coincidence?... is The Man You'll Marry. After her own wedding, Shelly sends her best friend--Jill Morrison, the dress--which is delivered to Jill's hotel in Hawaii. But at least the man she sat beside on the plane--gorgeous grouch Jordan Wilcox--can't be the man in question, can he? She met him before she got the dress!"--P. [4] of cover.