Secrets to the grave 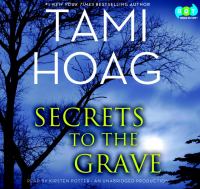 Four-year-old Marissa Fordham, brutally slashed and mutilated, witnessed the murder of her mother. To protect their fragile witness, the police call in Anne Leone, child advocate. But when one loose thread begins to unravel the shroud of lies behind the case, a truth more terrible than anyone could have imagined is revealed--a truth that will put Anne and Haley directly in the sights of a killer.