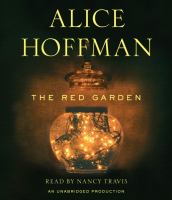 In the mid 1700s, Hallie Brady, hopelessly married to a fool, finds herself stranded in the middle of nowhere with a few other families. For shelter from the oncoming winter, the group digs in and Hallie becomes the founder of Blackwell, Massachusetts. Over the centuries, the people and landscape of Blackwell have changed, but the red garden, the land where Hallie's house originally stood, has endured.