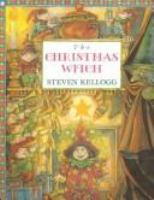 Book
Gloria must prove that she has what it takes to become a Christmas Witch by bringing peace to a planet occupied by two feuding factions.