Trains on the move 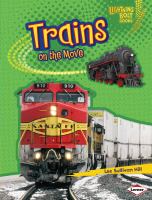 Book
Introduces trains, describing their parts, discussing what they carry, and explaining how they move.