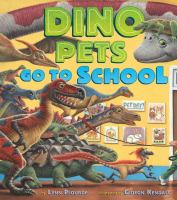 Book
A boy brings various dinosaurs to school, but discovers that neither the loudest, nor the tallest, nor the smartest is suited to the classroom. Includes facts about dinosaurs.