Franklin and Winston : a Christmas that changed the world 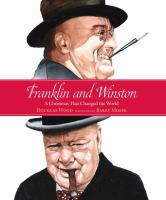 Book
At the height of World War II, only a few days after the attack on Pearl Harbor, President Franklin Delano Roosevelt and Prime Minister Winston Churchill began an extraordinary visit, during which they made plans that would lead to the success of the Allied powers as well as to a continuing peace after the war ended.