How cool is this?. 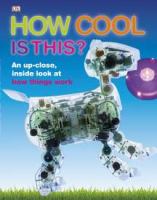 Book
Explains the scientific ideas and discoveries behind some of the world's coolest inventions and natural wonders.