Dinosaur vs. the library 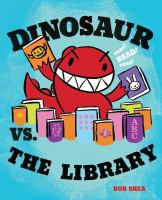 Book
Dinosaur is going to one of his favorite places, the library, and on the way he encounters a series of animals, including a cow, baby chicks, a turtle, and an owl, and shares his roars with each.