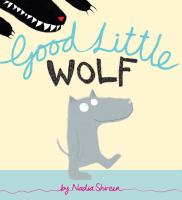 Rolf is proud when his friend, Mrs. Boggins, calls him a good little wolf, but when the Big Bad Wolf teases him Rolf tries to prove himself by howling at the moon and blowing down Little Pig's house.