Cities and statecraft in the Renaissance 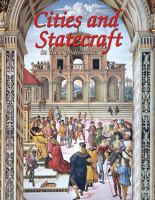 Book
Cities and Statecraft in the Renaissance looks at the rise of trade, commerce, guilds, and the merchant and ruling classes in northern Europe. This influenced the growth of towns, cities, states, and regions, who competed with one another for power, artistic talent, and creativity. At the same time, people rich and poor were struggling to establish new forms of society and government.