100 yards of glory : the greatest moments in NFL history 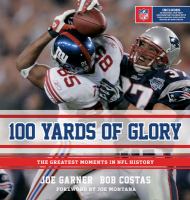 Book
"The Immaculate Reception. The Ice Bowl. The Music City Miracle. The Catch. For nearly a century, the National Football League has provided fans with pulse-pounding moments on the gridiron. In the tradition of their revolutionary collaboration, And the Crowd Goes Wild, veteran chronicler of broadcast history, Joe Garner, and broadcast icon, Bob Costas team up to bring fans this one-of-a-kind compendium of NFL history--a lavishly illustrated hardcover book, with gripping text and archival photographs, as well as an original 10-part documentary, produced by an Emmy-Award winning team, hosted by the inimitable Costas and featuring official NFL video highlights. From the great dynasties to the improbable catches, the legendary coaches to the heroic QBs, the most incredible comebacks to the most notorious flubs, 100 Yards of Glory relives--in text and video--the most unforgettable moments in the game. Also available as an enhanced ebook, 100 Yards of Glory is a must have for any football fan"--
"A fully illustrated book and accompanying DVD of the NFL's greatest moments"--