The cupcake diaries : recipes and memories from the sisters of Georgetown Cupcake 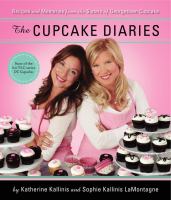 Book
"On Valentine's Day, 2008, sisters Sophie Kallinis LaMontagne and Katherine Kallinis opened the doors to Georgetown Cupcake, a tiny bakery tucked on a quiet side street in the heart of Georgetown in Washington, DC. They had given up the security of corporate jobs - Sophie, a Princeton graduate, in venture capital; Katherine, a graduate of Marymount University, who loved fashion, at Gucci, to fulfill a lifelong goal. For years, they had scrimped, saved, and skipped vacations and nights out with their friends and instead spent countless nights cleaning, painting, and constructing their shoe-box sized shop to make their dream into a reality. They expected to sell about 100 cupcakes a day. What happened instead was success beyond their wildest expectations. Two years later, the sisters have opened a second location, launched a nationwide shipping operation, and have embarked on a hit TV series, DC Cupcakes, on cable network TLC. Georgetown Cupcake's meteoric rise is the realization of a dream rooted in the special bond that Sophie and Katherine formed with each other and their grandmother since childhood. It is a tribute to the memories they share and the important lessons they learned, both about baking and about life. In The Cupcake Diaries, Sophie and Katherine weave personal journeys into a colorful celebration of Georgetown Cupcake's sweet success. With this book, Sophie and Katherine hope to inspire others, especially women, to follow and live their dreams and to celebrate their families"--