V is for vengeance 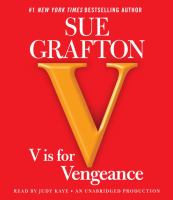 A woman with a murky past who kills herself - or was it murder? A dying old man cared for by the son he pummeled mercilessly. A lovely woman whose life is about to splinter into a thousand fragments. A professional shoplifting ring racking up millions in stolen goods, and the spider at the center of the web. And Kinsey Millhone, whose thirty-eighth birthday gift is a punch in the face that leaves her with two black eyes and a busted nose.