Weapons, gear, and uniforms of the Civil War 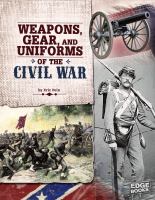 Book
"Describes the uniforms, gear, and weapons used by Union and Confederate forces during the American Civil War"--Provided by publisher.