A wind in the door 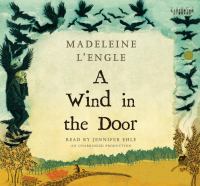 With Meg Murry's help, the dragons her six-year-old brother saw in the vegetable garden play an important part in his struggle between life and death.