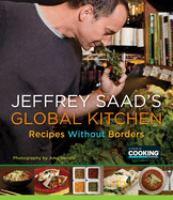 Book
"FLAVORS FROM AROUND THE WORLD. NO PASSPORT REQUIRED. Cilantro and chili peppers are Mexican royalty. Oregano and basil have defined Italian foods for centuries. And nothing recalls the tastes of India more than cumin and coriander. Anything from a plain chicken breast to a fresh-from-the-ocean fillet can be transformed into dozens of different ethnic dishes, and chef Jeffrey Saad is just the person to show you how. In his cookbook debut, Saad--restaurateur and star of the Cooking Channel's United Tastes of America--takes you on an international tour to celebrate and savor the flavors of the globe without ever leaving your kitchen. Journeying through popular culinary hotspots from France, Italy, and Spain to India, Southeast Asia, and the Middle East, Saad breaks down the core spices that define each region's cuisine and showcases scrumptious recipes inspired by these global palates. In addition to salads, soups, and sandwiches, Jeffrey Saad's Global Kitchen includes tantalizing tapas, from Crustless Sweet Onion and Potato Spanish Tart to Crab Tostadas with Fire-Roasted Chiles and Wild Mushroom Bruschetta with Shaved Parmesan healthful--and delicious--vegetarian dishes, including Butternut Squash and Allspice Risotto, White Bean Soup with Rosemary Pesto, and Sweet and Spicy Chinese Long Beans a carnivore's delight, including Smoked Paprika Buttermilk Fried Chicken, Beef Bourguignonne, Pork Chops with Carmelized Apples and Arugula, and Jeffrey's signature Harissa Steak Sandwich (featured on The Next Food Network Star) fish lovers' fare, from Lobster Pot Pie and Grilled Tilapia in Spicy Asian Broth to Five-Spice Shrimp Sliders and Turmeric-Grilled Scallop Pitas sinful desserts, including Almond-Orange-Chocolate Biscotti and Nutella Crepes Plus--sections on extremely delicious tacos and burritos, the bodacious beauty (and versatility) of the egg, and a multitude of pasta pleasures--with mouthwatering color photos throughout Written with Saad's showstopping passion for food and seasoned with helpful sidebars and cooking essentials, this easy-to-use recipe guide is a melting pot of culinary wisdom. Whether you like savory or sweet, keeping it mild or kicking up the heat, Jeffrey Saad's Global Kitchen shows you how to eat globally and cook locally with gourmet-quality results"--