We bought a zoo 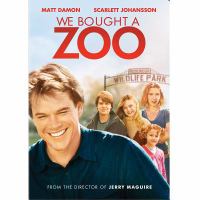 A memoir by Benjamin Mee, tells the true account of how the author and his family used their life savings to buy a dilapidated zoo, replete with 200 exotic animals facing destruction, in the English countryside. Mee, along with his children, had to balance caring for his wife, who was dying of brain cancer, with dealing with escaped tigers, raising endangered animals, working with an eclectic skeleton crew and readying the zoo for a reopening.