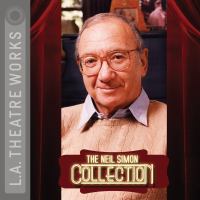 Ten classic Neil Simon plays (ca. 90 minutes each) are brought together in one collection.
Barefoot in the park: A comedy about a young newlywed couple in New York and the difficulties that they encounter in adjusting to marriage and life together in a fifth-floor walk-up apartment.
Plaza Suite a farce set on three brief encounters in the same suite at the famed Plaza Hotel in New York.
California suite: The story of five couples who have come to the Beverly Hills Hotel for diverse reasons and who must all confront some rather amusing personal dilemmas.
Brighton Beach memoirs: Fifteen-year-old Eugene Jerome is desperately trying to uncover life's mysteries, but his family keeps hiding the clues.
Broadway bound: The third and final installment of the playwright's acclaimed semi-autobiographical trilogy. After returning home from World War II, Eugene Jerome pairs up with his brother Stanley to break into the world of professional comedy writing. But a family crisis threatens to destroy their dreams of success.
The odd couple: Two poker buddies, one a hyper-neurotic, the other an incurable slob, suddenly find themselves bachelors again and decide to share a New York City apartment.
Prisoner of Second Avenue presents a humorous story of a married couple trying to survive life in their New York apartment building.
Chapter two: A widower and a divorcee both fear they will never find love again. But a grudging five-minute meeting between them blossoms into a passionate romance-- until they decide to marry.
Biloxi blues: Eugene Jerome, a naive recruit from Brooklyn, is sent to boot camp in Biloxi, Mississippi where he encounters a tough drill sergeant and an eclectic group of fellow recruits.
Lost in Yonkers: Set in Yonkers in 1942, two boys, aged 13 and 16, must spend one year with their austere and demanding grandmother. While the war rages in Europe, Jay and Arty learn the ropes from Uncle Louie and assorted relatives, all peculiar characters.