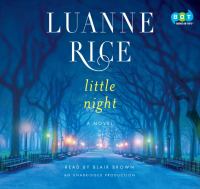 Clare Burke's life took a devastating turn when she tried to protect her sister, Anne, from an abusive and controlling husband and ended up serving prison time for assault. The verdict largely hinged on Anne's defense of her spouse -- all lies -- and the sisters have been estranged ever since. Nearly twenty years later, Clare is living a quiet life in Manhattan as an urban birder and nature blogger, when her niece, Grit, turns up on her doorstep. The two long for a relationship with each other, but they'll have to dig deep into their family's difficult past in order to build one. Together, they face the wounds inflicted by Anne and her husband and find in their connection a place of healing.