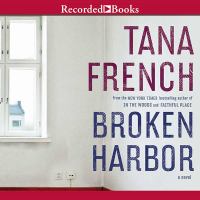 All but one member of the Spain family lies dead, and it's up to Mick "Scorcher" Kennedy to find out why. Mick must piece together why their house is full of cameras pointed at holes in the walls and how a nighttime intruder bypassed all the locks. Meanwhile, the town of Broken Harbor holds something else for Mick--disturbing memories of a childhood summer gone terribly wrong.