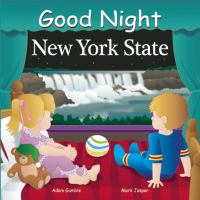 Presents the sights of New York, including the Catskill Mountains, Hudson River, Niagara Falls, the Statue of Liberty, and Lake Placid.